What is Boarder Gateway Protocol (BGP)

Border Gateway Protocol (BGP) is a set of rules and procedures that help an autonomous system (AS) exchange routing information over the internet. An AS is a network of computers run by an entity, e.g., a university or a large corporation, controlling a range of IP addresses.

Every AS manages a table containing all of its known routes to other networks, which is then propagated to neighboring networks (a.k.a., peers). The BGP decision-making mechanism analyzes the data and selects the best route for the next network hop.

BGP is the basis for the transfer of data between locations over the internet. It can also be used to manage routing within large networks, such as ISPs, layer 3 VPN services, IP telephony, large-scale web caching, or as a way to improve network stability.

See how DDoS Protection can help you with BGP routing.

BGP routers use Cisco’s best path algorithm to determine the best route to an AS, which is then stored for future reference.

To determine the best path to an AS, the algorithm compares each valid path with all other paths in a routing table according to the following criteria:

DNS routing and BGP routing are two DDoS mitigation techniques that mitigation providers deploy in front of a target network to detect and redirect malicious traffic.

A problem with DNS redirection, however, is that it can’t prevent direct-to-origin attacks on an IP address—it only functions at the application layer. This means that even if an IP is masked, it can still be discovered and targeted with malicious traffic.

BGP rerouting can mitigate direct-to-origin DDoS attacks by screening all incoming network traffic before it reaches its target. It functions at the network level by rerouting malicious network packets to security providers before they can reach DNS servers or other computing resources.

BGP routers can redirect high volumes of traffic to centralized data scrubbing centers used by a security provider. The scrubbing center analyzes traffic and filters out malicious DDoS attack traffic using deep packet inspection. It then allows healthy traffic to pass through to the AS.

The mitigation process for a BGP DDoS attack can be broken down as follows:

A prerequisite to making a BGP announcement is having control over a Class C subnet—a logical grouping of connected network devices. The subnet must have at least 256 IP addresses, meaning smaller company networks cannot typically benefit from BGP-enabled protection.

The Imperva Infrastructure Protection service provides network DDoS security by assigning an IP from our own IP range to a protected device. This means that all Incapsula users, regardless of whether they own a Class C subnet, can benefit from robust network layer protection.

Our dedicated multi-terabit scrubbing solutions use deep packet inspection (DPI) to identify and block malicious traffic to block even the biggest DDoS attacks. 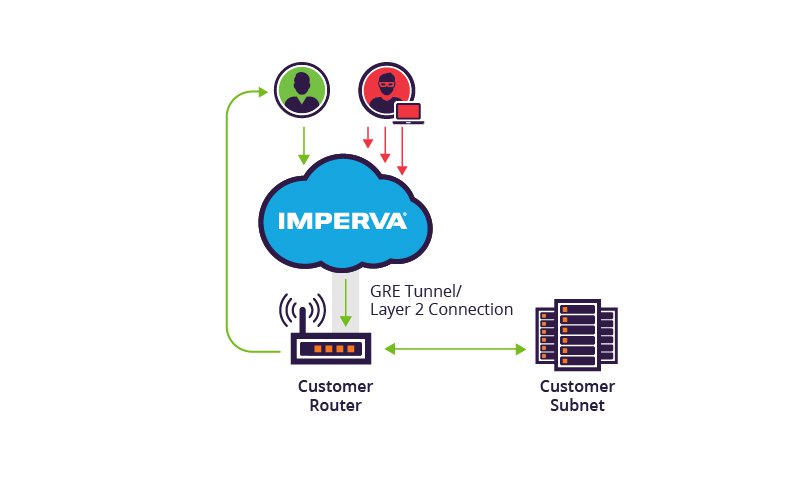 Infrastructure Protection can be deployed to defend important computing resources, including:

Infrastructure Protection is available as an always-on service or as an on-demand solution, with either manual or automatic switchover.

The solution is flexible enough to supports any type of service, including TCP, UDP, SMTP, FTP, SSH, VoIP and proprietary or custom protocols.