Skip to content
Search
Self driving cars are a good example of what artificial intelligence can accomplish today. Such tech-centered advances are built on the back of highly trained Machine Learning (ML) algorithms.

Accessing and pooling all that data needs complex and very expensive real-world hardware setups, aside from the extensive time it takes to gather the necessary training-data in the cloud (to train ML). Additionally during the learning process, hardware is prone to accidents, wear and tear which raises the cost and lead time in training the AI.

A digital twin can model a physical object, process, or person with abstractions that might be necessary to bring the real world behaviour in digital simulation. This is useful to data scientists who model and generate the needed data to train complex AI in a cost effective way.

An example is GE’s Asset Digital Twin – the software representation of a physical asset (like turbines). Infact, GE was able to demonstrate a savings of $1.6 billion by using digital twins for remote monitoring. 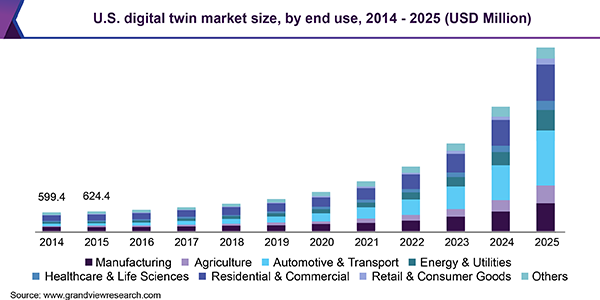 Research predicts the digital twin market will hit $26 billion by 2025, and major consumers of this technology being the automotive and manufacturing sector.

Tools at hand for digital twins

Unity3D ensures an easier production of AI for prototyping in robotics, autonomous vehicles and other industrial applications.

Self driving cars have a wide domain of variables to consider — lane detection, lane following, signal detection, obstacle detection etc. In our experiment at ThoughtWorks, we attempted to solve one of the problems; train a typical sedan-like-car to autonomously park itself in a parking lot through XR simulation.

The outcome of this experiment only produced signals such as the extent of throttle, brake and steering needed to successfully park the car in an empty lot. Other parameters like the clutch and gear shift were not calculated as they were not needed in the simulation. The outcome was applied in the simulation environment by a car controller script.

This simulation was made up of two parts, one was the car or the agent and the second was the environment within which we were training the car. In our project, the car was prefabricated (CAD model of car) and attached with a Rigidbody physics element (that simulates mass and gravity during execution).

The simulated car was given the following values:

The picture below, displays the ray cast sensors attached to the car:

Raycast sensors in all sides of the car to detect obstacles

The car’s digital twin was set up in the learning environment. A neural network configuration of four hidden layers and 512 neurons per hidden layer was configured. The reinforcement training was configured to run 10 million cycles.

The Reinforcement Learning (RL) was set up to run in episodes that would end or re-start based on the following parameters:

For our use case, an episode length of 5000 was chosen.

The rewarding scheme for RL was selected as follows:

A training farm was set up with 16 agents to speed up the learning process. A simulation manager randomized the training environment with parking lots having varying lot occupancy and the agent was placed at random spots in the parking area between episodes – to ensure the learning covered a wide array of scenarios.

The tensor graph after 5 million cycles looked like this:

Not only had the agent increased its reward, it had also optimized the number of steps to reach the optimal solution (right hand side of graph). On an average it took 40 signals (like accelerate, steer, brake) to take the agent from the entrance to the empty parking lot.

Here are some interesting captures taken during training:
​

Agent has leant to park both side of the parking lot

Agent learnt to park from random locations of the lot

We’ve just looked at how digital twins can effectively fast track production of artificial intelligence for use in autonomous vehicles at a prototyping stage. This applies to the industrial robotics space as well.

In robotics, specifically, the digital twins approach can help train better path-planning and optimization for moving robots. If we model the rewarding points around the Markov decision process, we can save energy, reduce load and improve cycle time for repetitive jobs – because the deep learning mechanisms maximize rewards in a lesser number of steps where possible.