How the advancements in several third platform technologies, innovation accelerators and other technologies – and their convergence – drive next generation applications and why and where it matters.

For years many of us have been paying attention to the ways that several technological realities such as big data, cloud computing, IoT and artificial intelligence (AI) are impacting organizations across numerous industries, applications and areas.

The convergence of multiple technologies such as AI, IoT and big data analytics have a significant impact with various cross-fertilizations, advancements, enrichments and next gen applications

When we looked at the several technologies in the SMAC stack (social, mobile, analytics and cloud) or IDC’s core 3rd platform technologies we looked at them separately but also in their combinations and interlinked value as they powered new next generation applications. It seemed pretty obvious that cloud services, big data/analytics, mobility (mobile devices, apps and broadband) and social (business) were fully intertwined ever since we started writing about that third platform, which IDC presented back in 2011.

In that sense of intertwining the same goes for the second platform and its many technologies in areas such as local area networks, the client-server model, personal computers, the Internet and so forth. And in case we forgot that these technology-driven realities, as well as their real underlying technologies (there is no such things as one social business technology, mobile technology or even cloud technology) had little value and impact as such, Gartner reminded us that it was the convergence of mobile, social, cloud and information which enabled digital business through what the research firm called The Nexus of Forces. 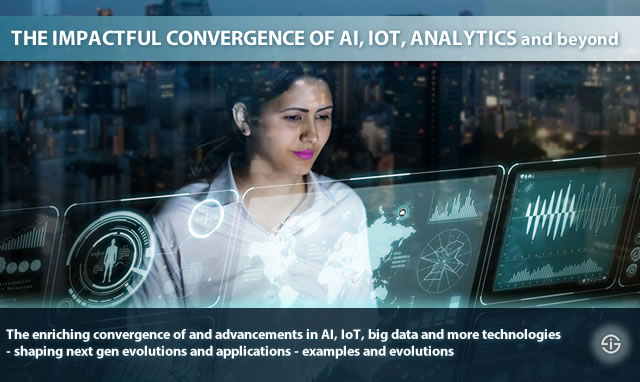 The tendency and risks of looking at emerging technologies in isolation

A few years later, while many organizations were (and are) still busy to understand digital business, let alone digital transformation (keeping in mind that the mentioned phenomena also deeply affected the lives and preferences of people and enabled innovations which would challenge organizations to adapt, another key aspect of digital transformation), and only started to adopt cloud in a more or less strategic way, we became confronted with several new – and sometimes not so new but evolved and advanced – technological realities of which at least a few, depending on the business and context, are on the mind of several managers today.

The Internet of Things, artificial intelligence and cognitive systems, 3D Printing, Augmented Reality (AR) and Virtual Reality (VR), robotics, you name it. In 2015, IDC decided to call the latter “innovation accelerators”, on top of the third platform because, well, they were accelerating digital transformation and innovation, leading to a DX (digital transformation) economy.

But of course it didn’t stop there. Technological change is a constant as is change itself. So, since then more technologies became ‘hot’: blockchain or, better, distributed ledger technology, fog computing (or edge computing) and so forth. As if it wasn’t enough we also heard about the convergence of IT and OT (Operational Technology) in the bridging of digital and physical worlds which was already essential in The Nexus of Forces and is key in what some have started to call Industry 4.0 or the fourth industrial revolution.

If you look at the Internet of Things (IoT) and artificial intelligence (AI), to name two key ones, you know that both are not really technologies but are umbrella terms that depict a commonality under which reside many other technologies of which we knew some and of which many were new and came in several flavors. Yet, of course for media, analysts, bloggers, companies and anyone really it’s easier to speak about IoT, AI, cloud and so on as if they were things.

The enriching convergence of advancements in AI, IoT, big data and more technologies

With the avalanche of ’emerging’ and ‘disruptive‘ technologies that came after the four building blocks of the third platform, many really started to look at any given technological reality such as IoT and AI from a somewhat isolated perspective.

What will be the impact of IoT in industry x? What will be the impact of AR for industry use case y? Admittedly, the same thing happened and does still happen when we talk about cloud or big data/analytics and we are guilty too. What else can you expect when there is so much happening at the same time. And for people who tried to make a bit sense of it all, it was already hard enough to get digital transformation, cloud computing, big data and so on that all those innovation accelerators and other emerging technologies made it hard to not just grasp their impact but also see how they interact and de facto converge (don’t tell anyone: it’s mainly still about the right data, knowledge and insights at the right time for the right purpose and right actions for the right people and outcomes).

Those with knowledge of all these technological realities obviously knew that they needed to be seen in relationship with each other, depending on the type of solution and the scope. And, equally obviously, they led to new solutions and applications when combined and converging. There isn’t that much that you can do with the Internet of Things without mobile technologies (again, depending on context), the cloud, data analytics and so forth, is there?

While, since 2015, some have been speculating that the Internet of Things and/or cyber-physical systems would be promoted from innovation accelerators (including components such as AI, natural interfaces etc.) to the fourth platform as depicted in the presentation Dell’s John Roese gave at the IoT Solutions World Congress 2016 on the industrial IoT revolution in continuous industry transformation, others looked more at pervasive computing and the collaboration between man and machine or a more human touch in a digitized and digitalized world of automation. It won’t be any of those as you might know. After all, a platform needs to be, well, a real different platform.

In a previous entry we tackled a beautiful example of this de facto convergence and, more specifically, of how AI is being applied to all sorts of technologies and use cases, from IoT and chatbots to computer aided diagnosis systems and big data in healthcare delivery solutions, based upon a Juniper Research announcement from September 5th, 2017.

Before we even start looking at the fourth platform it’s essential to go back to the third one and all the other technologies which we’ve just mentioned, precisely because of that often overlooked key dimension and impact of convergence and because the name of the game that will change applications and technologies in very profound ways is convergence.

How else could it be? It’s not as if technological advancements stand still until the next big thing, let alone, next platform is around. Just two examples for starters: the application of AI across IoT is going to drive the evolutions of the IoT market and its possibilities in a fundamental way and AI is instrumental in next generation security solutions. But there is more.

We’ve been urging to have a far more holistic view on all the mentioned technologies, their underlying technologies and their many potential combinations and game-changing convergence opportunities and realities since quite some time, especially when once again reading something, anything, that covered them as if they were things that lived in perfect isolation.

We’ve also been wanting to write about that convergence. The announcement by Juniper Research with regards to the mentioned rising number of applications, use cases and technologies where AI is applied reminded us to do so.

Moreover, on the exact same date Frost & Sullivan sent out a small press release on how the convergence of big data, IoT and AI, as well as the advancements within the various fields such as AI and big data analytics drive next generation applications.

Frost & Sullivan emphasizes two: visualization technology and advancements in Brain Computing Interface (BCI), with the improvement of human-machine interaction systems through the convergence of Big Data, BCI and AI as a result.

Yet, it doesn’t matter that much which technology advancements exactly shape which technological evolutions and applications. That whole convergence thing is pretty ubiquitous and it’s key to look at it from the perspective of innovation, purpose and those next generation applications of which some bring us pretty close to the fourth platform.

Top image: Shutterstock – Copyright: chombosan – All other images are the property of their respective mentioned owners.