Orange Belgium has nationwide LTE-M and NB-IoT coverage with Internet of Things (IoT) starter kit and an IoT platform for businesses and makers by AllThingsTalk, making Belgium the exception in the Orange wireless IoT strategy.

On May 4th, 2018, Orange Belgium announced it offers nationwide mobile IoT coverage. With mobile IoT Orange means Narrow Band IoT (NB-IoT) and LTE-M in the case of Belgium, which is an exception in Orange’s offering where non-cellular LPWA protocol LoRa and the LoRaWAN protocol (not the same, both in different layers of the OSI model) and cellular LTE-M take center stage.

That exception has a lot to do with competitor Proximus, the country’s largest operator that has been an early mover in the LPWA space and had nation-wide LoRaWAN availability shortly after its Northern neighbor, The Netherlands, where KPN and Actility signed for the first nationwide LoRaWAN IoT network coverage in the early days of LPWAN.

While KPN, Proximus and Orange, in their respective ‘home countries’ (for Orange being Belgium’s Southern neighbor France), have quite some LoRaWAN deployments and relatively strong partner ecosystems with system integrators, IoT platforms, etc. (in the case of Orange Belgium we note the platform of AllThingsTalk) also in Belgium and other European countries deployment of “real” larger scale IoT projects has been slower than anticipated. 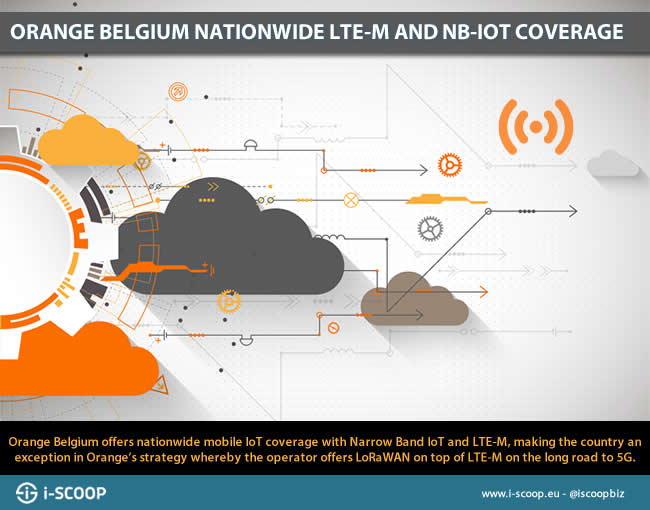 Just as is the case everywhere, operators are now formulating their strategies as demand for LPWAN is on the rise.

This is, among others, the case in IIoT (Industrial IoT) and Industry 4.0 where IoT applications pick up, in smart city projects which are really loved and increasing in Belgium (and where non-cellular LPWAN typically is often the open and cheaper best fit; there is also a reason why there is a preference for open source platforms in the scope of smart city IoT platforms) and IoT in general is starting to take off on somewhat serious and larger scales, with some IoT use cases clearly moving first. De facto we see LoRaWAN mainly being used by small and medium organizations (most organizations in Belgium and neighboring countries) and by governments/municipalities/cities, although that is surely not all.

Demand for LPWAN is increasing fastest in the overall Industrial IoT communications landscape and was already high for the typical low-power, wide-area use cases. Belgian organizations can leverage virtually all cellular and non-cellular options now.

Belgium is a small market with some dedicated and interesting start-ups of which some have clear international ambitions and a strong local reputation, which are all probably reasons why Orange Belgium works with other players (from the IoT platform perspective, for instance, do remember that Orange Business Services has its own IoT platform Datavenue for which Orange Business Services recently struck a deal with Siemens’ MindSphere as Datavenue is stronger from a network connectivity provider platform perspective).

NB-IoT has proven to not deliver upon its promises so far and until now has no real commercial large roll-out. Orange also prefers to offer LoRaWAN and LTE-M instead. The choice for LTE-M and NB-IoT in Belgium does give the company a playground for NB-IoT though.

In the meantime, Belgian competitor Proximus is investing even more in LoRaWAN in 2018, yet it also is behind NB-IoT with several testbeds on its own journey towards 5G (a journey that despite all the 5G and IoT hype is still long and full of hurdles and steps to take).

The fact that Orange offers NB-IoT and LTE-M coverage across Belgium can of course be interesting for the companies that have projects with typical lower-power, wide-area needs for their IoT projects and the typical IoT use cases where LPWAN is a good fit. Belgians are spoiled when it comes to LPWAN options. On top of LoRaWAN and cellular LPWA they also have Sigfox, though LoRaWAN is more important in the country. In February 2017 Engie M2M and cable company Telenet (finally) finished the roll-out of their Sigfox network in the small country, over a year after having announced it.

Obviously, the announcement from Orange Belgium on its NB-IoT and LTE-M coverage also comes with the necessary solutions for companies to get started.

Here there is no real ecosystem focus, which is more established with some integrators and partners for the mentioned reasons at Proximus (with locally quite active integrators such as Delaware Consulting, Ordina and Dimension Data, to name a few, and technology partners such as LoRaWAN pioneer Actility and Telit, among other things known from its strong IoT device management, edge platform and other IoT platform capabilities).

Inside the Orange Belgium wireless IoT roll-out and offering: the role of AllThingsTalk

For the commercial offering around its NB-IoT (which can work on 2G, 3G, and 4G mobile networks) and LTE-M offering Orange Belgium clearly opted for a strong collaboration with Belgian AllThingsTalk.

AllThingsTalk markets “a scalable IoT Product Platform-as-a-service which can be used as a prototyping environment, as well as for full service roll-out of IoT” and is pretty successful, also abroad, despite being relatively young. AllThingsTalk is a partner of both Orange and Proximus, raised 2 Million Euros and offers Rapid Development Kits, IoT gateways, an IoT platform and so forth.

AllThingsTalk also offers devices and solutions for LoRa and LoRaWAN, on top of NB-IoT.

The Orange Belgium NB-IoT and LTE-M offering comes with an “Orange NB-IoT Rapid Development Kit” which as the box indicates is from AllThingsTalk.

AllThingsTalk is one of those companies with international ambitions. Its LoRaWAN rapid development kit (which is just part of the offering making it easy for those wanting to start, test, deploy and monetize IoT fast yet gradually) that is available in Belgium with Proximus comes with access to the network of Swiss-based Loriot or, if you happen to live in London, with access to Digital Catapult’s Things Connected (launched in September 2016 as previously reported and not to be confused with Orange Belgium’s Connected Things mentioned below). Also other LoRaWAN Netherlands-based The Things Network and Actility’s ThingPark are supported by the company with its AllThingsTalk offering.

Further, Orange Belgium launches the ‘Orange Maker’ which it calls an application enabler yet is more an IoT platform with a focus on IoT device management, data management, SIM management and some application enablement platform (AEP) features in the scope of its Wireless IoT offering. It is also from AllThingsTalk, which as part of its IoT product PaaS offering has a developer platform with a focus on device connectivity and device interaction that is called ‘AllThingsTalk Maker’.

The cellular mobile IoT network offering of Orange Belgium itself is called ‘Connected Things’. According to Orange Belgium’s Ingrid Gonnissen (appointed Chief Enterprise Officer at Orange Belgium in 2016 and named ‘ICT Woman of the Year 2018’ by Belgian publication Data News) the company’s business customers are pleased with the choice for and offering of cellular IoT whereby as known the future-readiness for 5G is often mentioned as a benefit of LTE-M and NB-IoT.

For Belgian companies who want to leverage IoT in a more or less serious way now and have the need for LPWA in a limited low-power wide-area deployment or as part of a professional IoT project at scale with a mix of various connectivity technologies, including LPWA, it’s best not to wait for 5G though (unless they have a lot of years before starting of course) but look at their current and future needs, balanced against the available options, context (e.g. physical location of the ‘things’, data rates, batteries, maturity of the project, test versus real deployment, etc.) and desired outcomes, when opting for the LPWAN solution that suits them best.

As a reminder: in LPWA sometimes LTE-M is better, sometimes LoRaWAN is better, NB-IoT for now is a tricky one but also has its typical situations when it’s a better fit and so forth. As per usual: it’s not a matter of this or that nor of operator choice but of what makes best sense for your project.

Top image: Shutterstock – Copyright: Omelchenko – All other images are the property of their respective mentioned owners. Tutorials.one has no commercial nor other relationship with any of the mentioned companies.