OpenShift is a cloud development Platform as a Service (PaaS) developed by Red Hat. It is an open source development platform, which enables the developers to develop and deploy their applications on cloud infrastructure. It is very helpful in developing cloud-enabled services. This tutorial will help you understand OpenShift and how it can be used in the existing infrastructure. All the examples and code snippets used in this tutorial are tested and working code, which can be simply used in any OpenShift setup by changing the current defined names and variables.

This tutorial has been prepared for those who want to understand the features and functionalities of OpenShift and learn how it can help in building cloud-enabled services and applications.

After completing this tutorial, readers will be at a moderate level of understanding of OpenShift and its key building block. It will also give a fair idea on how to configure OpenShift in a preconfigured infrastructure and use it.

Readers who want to understand and learn OpenShift should have a basic knowledge of Docker and Kubernetes. Readers also need to have some understanding of system administration, infrastructure, and network protocol communication.

OpenShift is a cloud development Platform as a Service (PaaS) hosted by Red Hat. It’s an open source cloud-based user-friendly platform used to create, test, and run applications, and finally deploy them on cloud.

OpenShift is capable of managing applications written in different languages, such as Node.js, Ruby, Python, Perl, and Java. One of the key features of OpenShift is it is extensible, which helps the users support the application written in other languages.

OpenShift comes with various concepts of virtualization as its abstraction layer. The underlying concept behind OpenShift is based on virtualization.

In general, virtualization can be defined as the creation of a virtual system rather than physical or actual version of anything starting from system, storage, or an operating system. The main goal of virtualization is to make the IT infrastructure more scalable and reliable. The concept of virtualization has been in existence from decades and with the evolution of IT industry today, it can be applied to a wide range of layers starting from System level, Hardware level, to Server level virtualization. 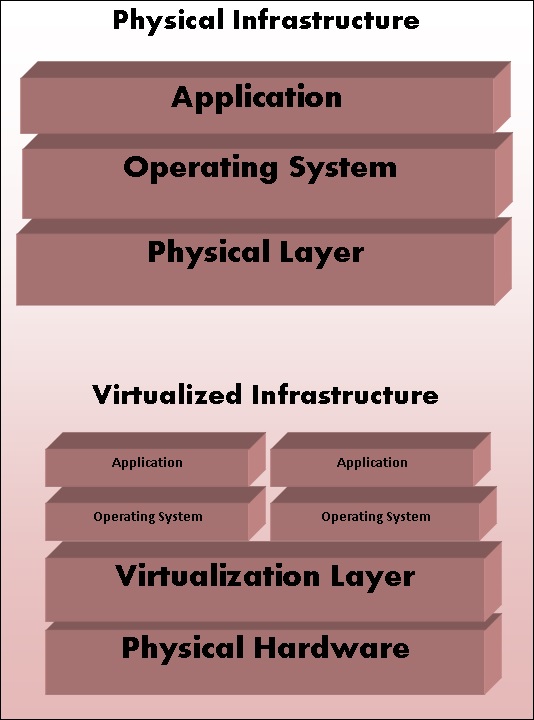 OpenShift is a cloud-enabled application Platform as a Service (PaaS). It’s an open source technology which helps organizations move their traditional application infrastructure and platform from physical, virtual mediums to the cloud.

OpenShift supports a very large variety of applications, which can be easily developed and deployed on OpenShift cloud platform. OpenShift basically supports three kinds of platforms for the developers and users.

Infrastructure as a Service (IaaS)

In this format, the service provider provides hardware level virtual machines with some pre-defined virtual hardware configuration. There are multiple competitors in this space starting from AWS Google cloud, Rackspace, and many more.

The main drawback of having IaaS after a long procedure of setup and investment is that, one is still responsible for installing and maintaining the operating system and server packages, managing the network of infrastructure, and taking care of the basic system administration.

Software as a Service (SaaS)

With SaaS, one has the least worry about the underlying infrastructure. It is as simple as plug and play, wherein the user just has to sign up for the services and start using it. The main drawback with this setup is, one can only perform minimal amount of customization, which is allowed by the service provider. One of the most common example of SaaS is Gmail, where the user just needs to login and start using it. The user can also make some minor modifications to his account. However, it is not very useful from the developer’s point of view.

Platform as a Service (PaaS)

It can be considered as a middle layer between SaaS and IaaS. The primary target of PaaS evaluation is for developers in which the development environment can be spin up with a few commands. These environments are designed in such a way that they can satisfy all the development needs, right from having a web application server with a database. To do this, you just require a single command and the service provider does the stuff for you.

OpenShift provides a common platform for enterprise units to host their applications on cloud without worrying about the underlying operating system. This makes it very easy to use, develop, and deploy applications on cloud. One of the key features is, it provides managed hardware and network resources for all kinds of development and testing. With OpenShift, PaaS developer has the freedom to design their required environment with specifications.

Free − This plan is limited to three years with 1GB space for each.

Bronze − This plan includes 3 years and expands up to 16 years with 1GB space per year.

Sliver − This is 16-year plan of bronze, however, has a storage capacity of 6GB with no additional cost.

Other than the above features, OpenShift also offers on-premises version known as OpenShift Enterprise. In OpenShift, developers have the leverage to design scalable and non-scalable applications and these designs are implemented using HAproxy servers.

There are multiple features supported by OpenShift. Few of them are −

OpenShift came into existence from its base named OpenShift V2, which was mainly based on the concept of gear and cartridges, where each component has its specifications starting from machine creation till application deployment, right from building to deploying the application.

Cartridges − They were the focal point of building a new application starting from the type of application the environment requires to run them and all the dependencies satisfied in this section.

Gear − It can be defined as the bear metal machine or server with certain specifications regarding the resources, memory, and CPU. They were considered as a fundamental unit for running an application.

Application − These simply refer to the application or any integration application that will get deployed and run on OpenShift environment.

As we go deeper in the section, we will discuss on different formats and offerings of OpenShift. In the earlier days, OpenShift had three major versions.

OpenShift Origin − This was the community addition or open source version of OpenShift. It was also known as upstream project for other two versions.

OpenShift Online − It is a pubic PaaS as a service hosted on AWS.

OpenShift Enterprise − is the hardened version of OpenShift with ISV and vendor licenses.

OpenShift online is an offering of OpenShift community using which one can quickly build, deploy, and scale containerized applications on the public cloud. It is Red Hat’s public cloud application development and hosting platform, which enables automated provisioning, management and scaling of application which helps the developer focus on writing application logic.

Step 1 − Go to browser and visit the site https://manage.openshift.com/ 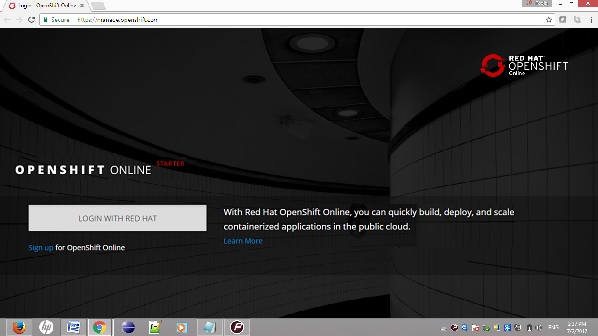 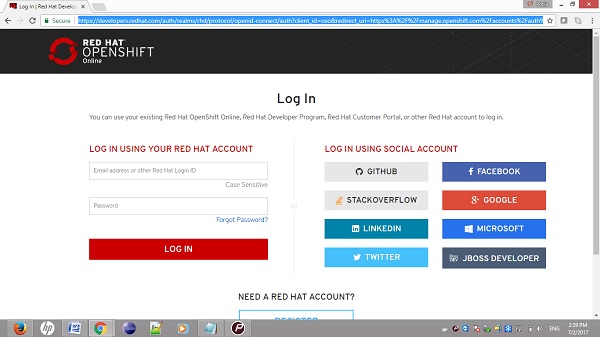 Step 3 − If you do not have a Red Hat account login, then sign up for OpenShift online service using the following link. 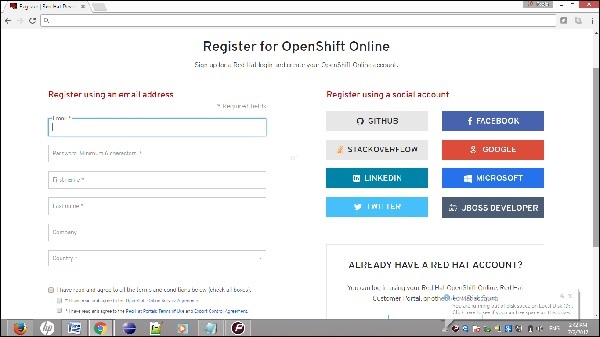 After login, you will see the following page. 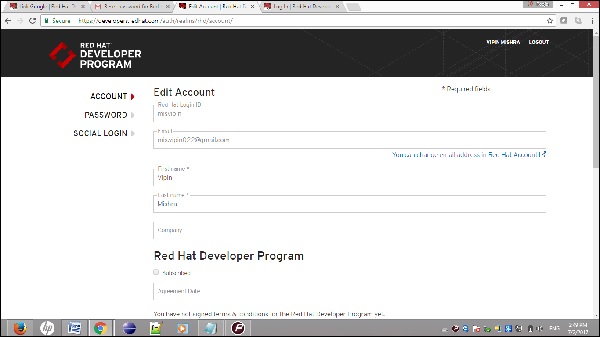 Once you have all the things in place, Red Hat will show some basic account details as shown in the following screenshot.

Finally, when you are logged in, you will see the following page. 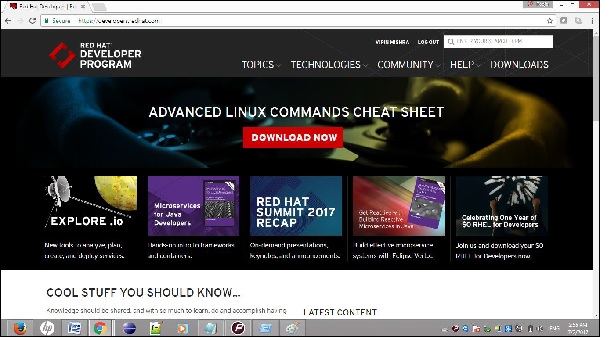 OpenShift container platform is an enterprise platform which helps multiple teams such as development and IT operations team to build and deploy containerized infrastructure. All the containers built in OpenShift uses a very reliable Docker containerization technology, which can be deployed on any data center of publically hosted cloud platforms.

OpenShift container platform was formally known as OpenShift Enterprises. It is a Red Hat on-premise private platform as service, built on the core concept of application containers powered by Docker, where orchestration and administration is managed by Kubernetes.

In other words, OpenShift brings Docker and Kubernetes together to the enterprise level. It is a container platform software for enterprise units to deploy and manage applicants in an infrastructure of own choice. For example, hosting OpenShift instances on AWS instances.

OpenShift Container Local − This is for those developers who wish to deploy and test applications on the local machine. This package is mainly used by development teams for developing and testing applications.

OpenShift Container Lab − This is designed for extended evaluation of application starting from development till deployment to pre-prod environment. 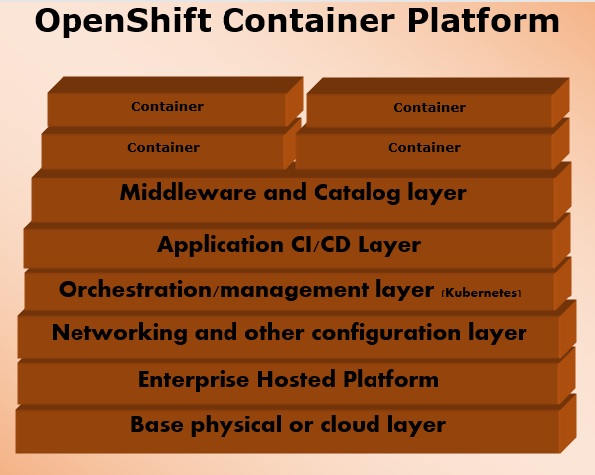 This is another offering added to the portfolio of OpenShift, wherein there is a customer choice of hosting a containerized platform on any of the public cloud of their choice. This gives the end user a true sense of multi-cloud offering, where they can use OpenShift on any cloud which satisfies their needs.

This is one of the newest offering of Red Hat where the end user can use OpenShift to build test deploy and run their application on OpenShift which is hosted on cloud.

Microsoft Azure − Azure cloud is hosted by Microsoft on their data centers.

Amazon Elastic Cloud Compute − They are built-in services provided by Amazon, which help in developing and hosting scalable web applications on cloud.

CloudStack − Apache’s CloudStack is a project developed by Citrix and is designed to become a direct competitor of OpenShift and OpenStack.

Kubernetes − It is a direct orchestration and cluster management technology built to manage Docker container.