NB-IoT device shipments will likely triple in 2019, reaching a total of around 142 million units (on a yearly basis). There is a somewhat larger diversity in the use cases for which NB-IoT is used. These are, among others, in the sphere of the connected home and some building applications.

While early deployments have so far been focused on traditional verticals such as smart metering, NB-IoT is expected to be integrated into a broader set of products in 2019–2020, including home appliances, door locks and smoke detectors.

Despite a delayed deployment of NB-IoT and LTE-M, the main cellular LPWAN standards for low power wide area network IoT (Internet of Things) applications, NB-IoT device shipments are expected to pick up speed outside the largest market by far – China.

Moreover, in the period 2019-2020 NB-IoT deployments are expected to go beyond the traditional verticals such as smart metering, which have been so far the main drivers of LPWAN growth overall.

According to new data from Berg Insight (June 2019), NB-IoT device shipments reached 53 million units in 2018 and annual NB-IoT device shipments are expected to triple this year as ever more operators roll out their NB-IoT networks. US operators now have their NB-IoT networks too (they started with LTE-M) as written previously and in Europe NB-IoT is becoming broadly available with the focus now shifting towards LTE-M. Or, as the CEO of IoT platform and services company AllThingsTalk (that was and is closely involved with some European non-cellular LPWAN, NB-IoT and LTE-M rollouts), Tom Casaer, puts it: “the operators…are slowly moving from Narrowband-IoT towards LTE-M and most likely the two networks will exist in parallel because they serve different needs”. 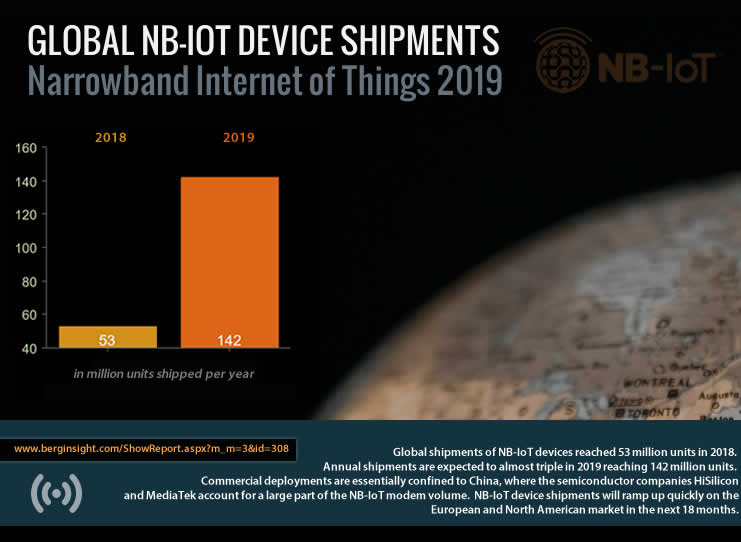 China remains a major player though and is moving fast from GPRS to NB-IoT in the mass-market segment with cumulative NB-IoT shipments expected to exceed 190 million units (so, not per year but overall) by the end of 2019, according to Berg Insight.

So, while in Europe the focus is shifting to rolling out LTE-M, after many NB-IoT deployments, yet some operators also sticking with non-cellular LoRa on top of LTE-M (as Orange did in most countries so far while others use NB-IoT for specific applications and offer LoRa and LTE-M for the rest as Proximus does in Belgium), by the end of 2019 Berg Insight expects 142 million NB-IoT devices will be shipped.

Commercial deployments are essentially confined to China, the dedicated M2M/IoT market research firm says, with HiSilicon and MediaTek accounting for a large part of the NB-IoT modem volume.

Berg Insight Senior Analyst Fredrik Stalbrand said that NB-IoT device shipments will ramp up quickly on the European and North American market in the next 18 months (which brings us into 2020).

Europe began to see adoption of LTE CAT-1 in 2018 and is now followed by an accelerated uptake of LTE-M and NB-IoT in 2019/2020. China is moving fast from GPRS to NB-IoT in the mass-market segment and cumulative NB-IoT shipments are expected to exceed 190 million units by the end of 2019. At the same time there will also be fast-growing demand for LTE CAT-1 and LTE-M, as well as LTE CAT-3+.

On the broadening of IoT use cases on top of smart metering and other traditional ones for NB-IoT, Stalbrand expects to see NB-IoT being integrated into a broader set of products in 2019–2020, including home appliances, door locks and smoke detectors.

Stalbrand points to the inherent security of cellular connectivity (where in the space of LPWA networks there are three standards: LTE-M, NB-IoT and the not rolled out EC-GSM-IoT) as one of the reasons why the NB-IoT standard provides several benefits to the connected home and building segment. Another benefit is the low power consumption; yet here NB-IoT doesn’t have a benefit over LPWAN standards in the non-cellular space where LoRa and Sigfox have most network connections – and are expected to keep that lead for quite some years before NB-IoT and LTE-M take over in terms of connections.

Nevertheless, a tripling of NB-IoT device shipments in 2019 as compared to 2018 and the addition of more use cases where NB-IoT is to be deployed is a sign that NB-IoT is clearly picking up. Knowing that most network rollouts last year were for NB-IoT and LoRa the opposite would be worrying for operators of course.

On a side note: the fact that e.g. Sigfox hasn’t rolled out many new networks while there were more for NB-IoT and LoRa doesn’t mean that device shipments nor number of connections for each of them (thus used by clients) follow that same growth pattern of couse.

2G and 3G will be in steady decline in all developed markets with demand shifting to developing countries with limited availability of 4G networks.

Berg Insight further points out that the global trend of the transition from 2G to 4G is accelerated by NB-IoT and reminds that the major North American carriers were late adopters of the technology but are now adding or trialing NB-IoT in their networks as a complement to LTE-M (essentially because they had to).

In North America T-Mobile launched an NB-IoT service in 2018. Verizon and AT&T followed later with AT&T being the latest one, not that long ago. In 2017, Verizon had said it would only deploy LTE-M and go with LoRaWAN for the rest. AT&T didn’t see a differentiator for offering NB-IoT on top of LTE-M in that same year. On a side note: AT&T recently also announced LTE-M roaming activation, together with – for now – three European operators.

The M2M/IoT market research firm also mentions some of the operators that have NB-IoT networks rolled out at the time of writing this (things do go fast, however), pointing out that European mobile operators are on their way to ubiquituous NB-IoT coverage.

It should be reminded that NB-IoT (a.k.a LTE Cat-NB1 or LTE Cat-M2) was more intended for the European market to begin with of course (and obviously it’s big in China and in the APAC region) while LTE-M was more for the US market.

Developments in China accelerate a global shift from 2G/3G to 4G technologies.

The overview of operators offering NB-IoT per Berg Insight:

The announcement on the trends in the NB-IoT device market in 2019 and 2020 came one day after an update from the company on the shipments of cellular IoT modules.

The 3GPP standards for LTE – Cat M and NB-IoT – will contribute substantially to growth of cellular IoT modules shipments in the next coming five years.

Regarding NB-IoT and LTE-M the research company says that several new players have been attracted to the market, particularly in the emerging NB-IoT and LTE-M segment with notable examples including the major Bluetooth LE SoC vendor Nordic Semiconductor and the Japanese electronics company Murata.

Berg Insight also reminds that in the first half of 2019, several vendors announced 5G NR (5G New Radio)modules (Ericsson just announced the commercial availability of new, enhanced, 5G NR software at the time of writing this as well) that will become available to developers in the second half of the year as we slowly move towards 5G where NB-IoT and LTE-M have a place in the combination of 5G and IoT.

Recently, Berg Insights stated that one of the first major use cases for 5G cellular IoT might very well be homeland security (and other security areas) with AI-supported security surveillance and monitoring cameras (probably in the early 2020s), one of the most discussed areas and, according to analyst Tobias Ryberg ‘likely to become one of the most controversial issues in the next decade’.

In the meantime, IDC came with new data on the volumes of data expected to be created in IoT whereby edge computing becomes more important and the main source where massive big data volumes from connected devices are created, indeed, are video surveillance applications, followed by manufacturing (Industry 4.0) and healthcare.

Some final notes from the executive summary of the new research (PDF opens) for those that know the different network technologies and evolutions a bit better (including the latest 3GPP releases): there will also be fast-growing demand for LTE CAT-1 and LTE-M, as well as LTE CAT-3+.

2G and 3G will be in steady decline in all developed markets with demand shifting to developing countries with limited availability of 4G networks.

The data and findings communicated by Berg Insights are part of its Cellular and LPWA IoT Device Ecosystems – 3rd Edition which is part of its M2M Research Series.