Barcelona’s Industry Week 2017 goes fully Industry 4.0 and sees Industrial Internet and Industrie 4.0 associations boost one of its many events, IoT Solutions World Congress 2017. The momentum is there – is the value of Industry 4.0 and IIoT too?

Taking into account the various industry partnerships which are continuously taking place, specialized vendors, associations, universities, research facilities, government bodies and even nations are serious about pushing the Industry 4.0 agenda across the globe.

Associations and collaborations drive the Industry 4.0 agenda, also at IOTSWC 2017

The latter, who started working on the vision and framework of Industry 4.0 in 2011 as part of a German government initiative for manufacturing, has been expanding the scope – and industries – covered by Industry 4.0 while forging partnerships with myriad similar initiatives across the globe. 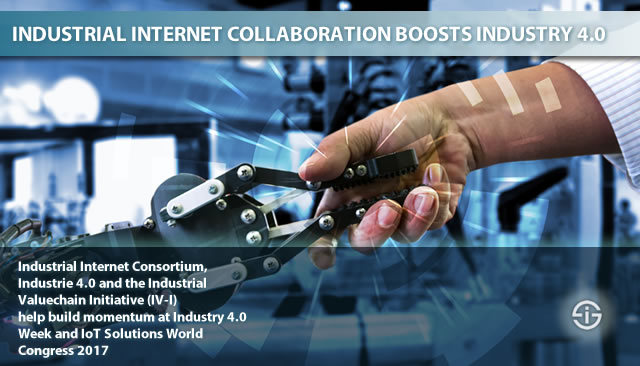 The avalanche of Industry 4.0 partnerships across the globe

Speaking about governments and all these national initiatives, there are new ones such as Japan’s Society 5.0 and, while the Industry 4.0 platform already worked with another Japanese program, prior to the launch of that Society 5.0, new partnerships continue to be struck.

Moreover, supra-national organizations such as the EU try to boost – and more or less align – the large number of member state initiatives as we covered in March 2017 in an article on how the EU wants to boost manufacturing digitization, transformation and Industry 4.0.

And it doesn’t stop there. Collaborations between universities, companies of various backgrounds and, again, governmental institutions are happening all the time in any possible sense, direction and shape. Take the launch of IBM’s Watson IoT headquarters in Munich Germany and its ‘collaboratory‘ approach. Or the launch of a network of Industrie 4.0 Digital Capability Centers, also in 2017. It simply doesn’t stop.

We can also add IoT industry events and Industry 4.0 tradeshows such as Hannover Messe and Barcelona’s Industry Week to that really long  list.

The organizers of the Internet of Things Solutions World Congress (IOTSWC), which takes place from 3 to 5 October 2017 within the broader context of Barcelona’s Industry Week that lasts a bit longer (October 1 – 6), emphasize the importance of increasing support from industrial Internet associations.

Barcelona’s Industry Week 2017 shows the momentum – where is the value?

For its edition 2017, IoT Solutions World Congress can count on the support of, among others, the mentioned Industrial Internet Consortium or ICC, Germany’s Industrie 4.0, and the Industrial Valuechain Initiative (IV-I). No wonder that they aim to have more than 10,000 professional visitors this year (in 2016 the event attracted over 8,000).

Shall we agree Industry 4.0 is a hot topic? Unfortunately that doesn’t translate yet in the maturity of adoption and the existence of strategic plans in the companies that matter most: manufacturers and more. But then again, it is a journey as is digital transformation and one needs to start somewhere which de facto means we mainly see ad hoc projects with optimization goals for the moment.

Obviously, the support by industry associations such as the Industrial Internet Consortium isn’t the only reason why IOTSWC 2017 is expected to be a record edition, nor is the buzz around Industry 4.0. Manufacturing is and remains the major industry from an IoT spending perspective. Moreover, the event has a strong reputation and by including hot topics such as blockchain and IoT as we mentioned in an article on blockchain at IOTSWC 2017 it becomes all the more interesting for attendees.

On top of the Internet of Things a second major area is anything with regards to power management, building management, energy efficiency and savings, power availability and quality, green energy, ecology and critical power, not in the least because of regulatory reasons (read more about building management and IoT). These aren’t the only areas where Industry 4.0 value is created but they certainly are key. Moreover, the latter are also strongly impacted and impacting IoT.

From Industry Week to Industry 4.0 Week

When reading the press release on the supporting industrial Internet associations support for IoT Solutions World Congress 2017 it does seem that Barcelona’s Industry Week is very much about Industry 4.0 indeed and might hence be known as Barcelona Industry 4.0 Week. Yes, the term is hot indeed, maybe a bit too hot so beware of Industry 4.0 hype.

If you plan to not just visit IOTSWC 2017: other events during the industry week you might want to attend include Eurosurfas, Equiplast and In(3D)ustry From Needs to Solutions trade shows, the World Congress of Chemical Engineering, the World Chemical Summit, the Smart Chemistry, Smart Future event and more. The good thing (for organizer Fira Barcelona too) is that they are all organized in the same place.

More info about the long list of just mentioned Industry 4.0 week events in the Fira press release. The question that remains: are the companies that are pushed towards an increasing adoption and maturity with regards to Industry 4.0 and visiting one of several events effectively invest or not – and, more importantly, where and why?

Disclaimer: we have no commercial or other relationships with any of the mentioned companies or events or people. All images are property of their mentioned owners. Top image: Shutterstock – Copyright: Zapp2Photo