IoT platform revenue is expected to reach USD65 Billion in 2026

One of the crucial components of professional and scalable IoT deployments is the IoT platform. With the growth of large-scale IoT projects and the increasing role of Industrial IoT in areas such as manufacturing and other industries where these scalable IoT initiatives are launched, the IoT platform market is hot.

This isn’t just related to the increase of IoT initiatives in the scope of Industry 4.0 and beyond: a lot of large organizations from different industries have been very actively looking for the IoT platform that best meets their needs in 2016 and 2017. This will go on in 2018 and of course means that many will take actual decisions after having done their homework in 2018, 2019 and beyond (with an expected peak in 2019 as you can read below). 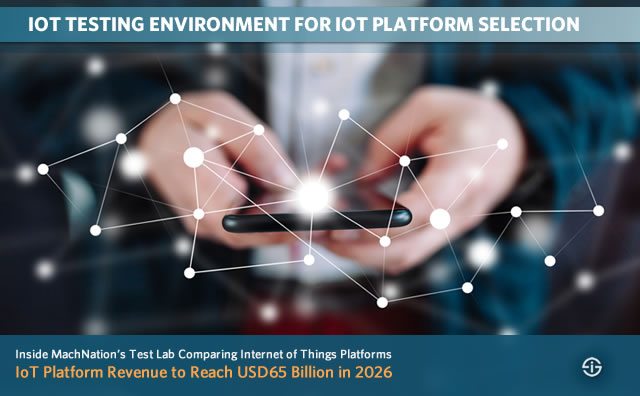 Moreover, the IoT platform landscape is evolving with more focus on the individual needs of IoT projects per company, in connection with related services and products on among others the level of analytics, and with the outcomes of IoT projects more in mind. Last but not least, as a result of the above, diversification is growing in an IoT platform landscape with over 400 players and huge differences between their offerings and the main industry applications they aim to realize. Objective IoT platform testing is becoming a must in such conditions.

The reason? The challenge for IoT platforms buyers remains the same: how do I know what IoT platform is best for my individual needs (while avoiding bad surprises after having picked one and seeing there is a difference between promise and reality)?

Enterprises are seeking actual hands-on data about the performance, features and capabilities of IoT platforms

One can buy expensive reports, go through all the details of the main offerings (hardly possible and feasible in this complex IoT platform war reality) and of course rely on partners who are selected in the scope of an IoT project or on peers who already deployed one.

A much better solution, however, would be to have an objective and detailed IoT platform comparison tools with actual data from an IoT testing environment to do just that.

However, by then the market will of course look very different from now as it’s already in full flux and, as mentioned, there isn’t such a thing as a one-size-fits-all IoT platform in a market where all companies have different needs and no IoT platform is the same and decreasingly will be the same (making the notion of ‘best IoT platforms’ as we often see it popping up de facto a bit silly).

MachNation MIT-E IoT Test Environment: what, how and, most important, why?

Back to the MachNation IoT Test Environment and what it does and offers to IoT platform buyers.

There are over 400 IoT platforms in the market worldwide

IoT testing environments in the largest sense are nothing new and there are vendors, such as Fujitsu, who have launched test environments for IoT systems, all the way from sensors and devices to the network layer, the IoT platform, the hardware and the application layer.

However, the MachNation IoT Test Environment aims to offer a solution for the mentioned and real challenge of enterprises and/or the partners they select to work regarding objective criteria to make the right IoT platform decisions. Given the crucial role of the IoT platform, the IoT platform wars, the fact that there are over 400 different IoT platforms out there and that, even if you only look at the main ones, there are important differences, that seems indeed like a much needed thing.

Essentially, MachNation IoT Test Environment has thousands of data points in its database on multiple IoT platform aspects such as IoT platform access control, IoT device management, analytics (crucial), integration (key for the future), event processing, monitoring and so forth.

For the first time, there is an affordable way to provide enterprises with actual, hands-on IoT platform test data (Steve Hilton, President, MachNation)

For each IoT platform there are data on the performance, features and capabilities of the tested IoT platform. These IoT test data can be consulted and reports are available for the different players, based on tests of 70 workflows and 280 scores per IoT platform.

At the time of launch the IoT testing environment included 5 of the better known IoT platforms which, according to MachNation account for about 15 percent of global IoT platform sales today. With an IoT platform market expected to reach $65 billion by 2026 it can be expected that more IoT platform vendors will want to be added. Since the launch, Sierra Wireless’ AirVantage IoT platform joined the 5 initial ones, being Amazon AWS IoT, Bosch IoT Suite, GE Predix, IBM Watson IoT Platform and Microsoft IoT.

By way of a taste of the results IoT platform buyers can expect to get from MachNation’s IoT testing environment for IoT platforms you can download a PDF that shows test results for Amazon’s AWS IoT here.

Obviously vendors of IoT platforms could decide not to join as a tool to compare based upon test data does show differences, for instance regarding the time to complete specific IoT Test Environment tasks as the image from the press release shows.

On the other hand, as the importance of IoT projects increases for organizations and as today’s buyer does want to be informed before taking crucial decisions in an area that becomes mission-critical, with a changing and ever more important role for the IoT platform and connected platforms, fast access to reliable data on IoT platform performance and so forth is, will and should be available. And, obviously, there tends to be a difference between marketing and what platforms promise to do on one hand and what they actually do as every informed buyer knows.

If MachNation’s IoT testing environment for IoT platforms will be the one that offers it remains to be seen but by writing about it we can only make the case for IoT platform buyers to look at it and for vendors of application enablement platforms (AEPs), IoT device management platforms (DMPs), analytics platforms and IoT orchestration platforms to request being added to it as the market continues to grow and, again, buyers want and deserve to be informed, IoT platform wars or not.

Top image: Shutterstock – Copyright: MDC Digital Studio – All other images are the property of their respective mentioned owners.