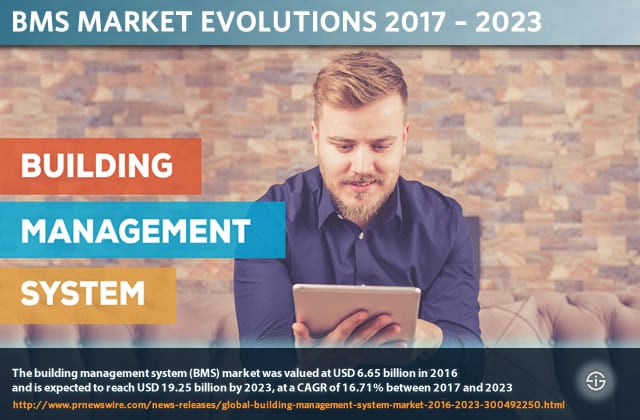 The two BMS levels which have been connected are the enterprise and management level, next comes the field level (Martin Feder)

According to the announcement of the BMS research, which looks at the BMS market by software, the BMS market is expected to grow at a double-digit CAGR (Compound Annual Growth Rate) of over 16.7 percent between 2017 and 2023. That would mean a total of USD 19.25 billion by 2023 for the BMS market with its various players (the report looks at 11 of them).

By way of comparison: in 2016 the building management system market was valued at USD 6.65 billion (industrial, commercial, and residential users).

Looking at the major drivers of the BMS market, we note:

The BMS market and technologies: from IoT and cloud to data analytics and AI/cognitive

This growing integration of IoT with building automation systems is also impacting the software part of the BMS market (which by the way also includes hardware, services and communications to name a few on top of the software solutions which are analyzed in the report).

Moreover, in today’s increasingly IoT-enabled integrated building management market, it is to be expected that smart devices which get integrated for building automation and management will become more self-governing and intelligent (read: autonomously taking decisions and reporting the what and why of these decisions to the central system) with regards to data sharing with building automation systems and with the cloud.

This entirely corresponds with the evolutions as they are mentioned in our BMS evolutions overview and the mentioned interviews we had with regards to building management (systems) and IoT but also interviews on lighting and room control and the IoT, connected power for smaller buildings and IoT and critical power buildings and IoT, to name a few – and how else could it be in a converging reality as the IoT and IP are causing?

Moreover, it’s of course not just about IoT. When we talk about data sharing and cloud we inevitably also talk about analytics, whereby the move of field controllers to the IP level and, next autonomous decision making at the field level is further increasing connectivity in building management according to Martin Feder.

Maintenance and servicing require trained and skilled personnel to ensure that BASs run smoothly and have a longer lifespan. In the absence of these conditions, the implementation of building management solutions and services become difficult

And in that scope, where we see autonomous decisions being taken across building elements we’re exactly seeing the same evolutions in the BMS market as in other markets where artificial intelligence and advanced analytics will be applied as we move to the next stage and critical data and insights are entering the BMS visualization system.

Obviously there are also challenges with regards to the BMS market. We note a lack of technically skilled workers, high initial implementation costs and more.

Check out the announcement of the research for more information on these challenges and findings from the report, which you can get here.

Top image: Shutterstock – Copyright: garagestock – All other images are the property of their respective mentioned owners.